We had a great time in Florida - despite a minor car accident!

Back in 2013, we were incredibly lucky to spend 3 weeks in Orlando Florida and had an absolutely amazing time.

We visited some fantastic places like Disney's Magic Kingdom, Universal Studios, SeaWorld, and Aquatica. We swam with Stingrays, scuba dived and swam with Dolphins at Discovery Cove, visited a fantastic beach and made lots of amazing memories.


My top tips are: before heading off on holiday, always make sure you have plenty of snacks and things to keep the Children entertained, make sure your tyres are correct for the climate you will be driving in. Use a trusted company like www.tyreplus.co.uk, and always make sure you are fully ensured or take out full insurance on hire vehicles. You will understand why as you read on!

As well as Liv and her Daddy we also went with my Aunty and Uncle and their Son and Daughter, a true Family holiday.

Things didn't start too well though when, after a 9 hour flight we got through the airport and arrived in the car hire area and were presented with a very small, 7 seat 4 by 4. Trying to stay positive in the sweltering heat, we went ahead and tried to squeeze everyone in along with a car seat for Liv, 7 suitcases, 7 lots of hand luggage and a stroller. Twenty minutes later we had to face facts, it was not going to happen in a million years!


So after a chat with a representative of the car firm, we were given another set of keys and sent off down the forecourt to our only other option, a 14 seat bus. Yep an actual BUS. My poor Uncles jaw hit the floor wondering if he would be able to not only drive on the opposite side of the road but also manoeuvre this beast around safely. It was on that thought that he disappeared back to reception and quickly upped the insurance to fully inclusive (for about £6 extra!) better to be safe than sorry.


We really had no option but to take the bus (literally) so the boys started to load the immense amount of luggage through the back doors while I was tasked with installing Livs car seat.


That is when we hit upon a little problem - to get in you had to be a gymnast as the floor of the bus was about 3 feet above the ground, I am hardly short at 5ft 10 inches but only just managed and only one of our group was taller than me. While everyone fell about laughing at my attempts to get in I was convinced there would be some steps inside once I managed to get in, surely . . . . . .


Yes, you guessed it NO steps. So after a lot of laughing and heaving and hoeing we managed to get all of the shorties in and we were all ready to begin our Orlando adventures.


First stop - Walmart for some steps! We left these in the bus when we returned it but I expect they were removed, I wouldn't be surprised if they have a stock room at the back filled with unwanted used steps.


We quickly got used to the bus and it actually ended up being a godsend having all the spare seats to spread out on when the heat started to get to us. Liv had her travel DVD player strapped to the headrest of the seat info t without it bothering anyone. We kept a box of toys and books on a spare seat to help keep her entertained on particularly long trips.

It was also very easy to pack everything we needed in when travelling for an hour or so each way to a park or beach, especially with a young toddler in tow. 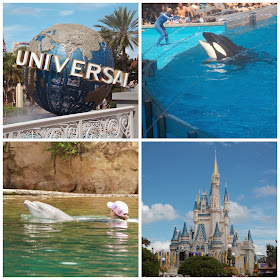 As it turned out, the insurance was also a Godsend as reversing the opposite way off the Villa's drive for the first time just three nights before we left, my Uncle misjudged the distance between the bus and the mail box across the road . . . . . .


All of our jaws dropped as we heard a loud bang/smash/scrape of metal. As it turned out he had only smashed the rear light, the bulb was still working and the mail box hadn't budged so we cleared up the mess and carried on our holiday wondering how much we would be charged when we returned the bus.


Three days later the lovely Gentleman that signed it off didn't even look at the damage before declaring "Sir with your insurance coverage you could have driven it off a cliff and we wouldn't have charged you!" It gave us all quite a giggle!
Lifewithliv at 13:00
Share